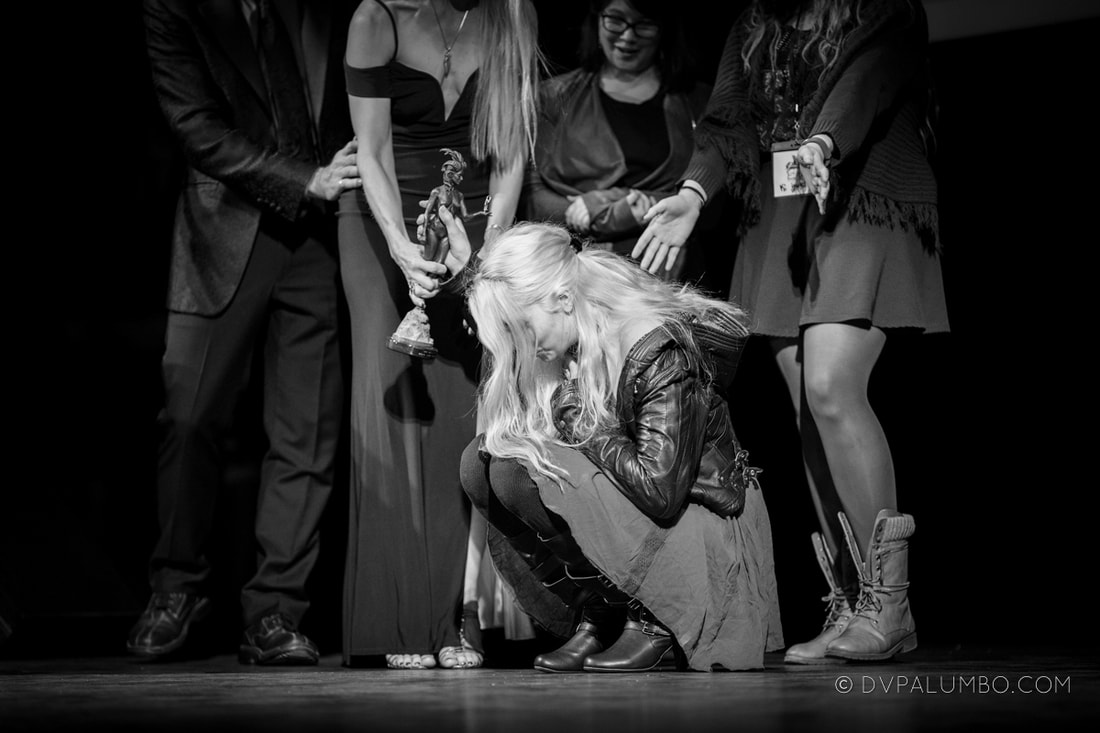 We were honored to collaborate with John Fleskes, of Flesk Publications, on designing and creating an award for each of the eight categories in the renowned Imaginative Realism Art annual, "Spectrum: The Best in Contemporary Fantastic Art." For two years, Spectrum 22 and Spectrum 23, we were commissioned to create 17 bronzes to acknowledge and further serve as an encouragement for artists whose work is selected by the Spectrum jury for special recognition.

We often hear of the "Artist’s Muse." Of the nine muses in ancient Greek mythology, there actually wasn't a muse for the visual arts. In those times, painters and sculptors were considered merely technicians who copied nature.  Given the incredible range of imagination and creativity demonstrated by artists in this field, it seemed like the perfect opportunity to create the Muse of Creation to reward their achievements.

In this version, the Muse is portrayed as a classic, elegant presence you might find on a monument in Paris – quiet, simple and direct.  She is wearing an elaborate horned headdress which can be seen either as ornamentation or as part of her being. In this rendering, the Muse is enchanted by the artist's creation and is herself presenting an award to the artist. In her outstretched hand is the 'flame of creation'–a three-dimensional adaptation of the Flesk Publications logo.

The Silver Awards are bronze with a silver nitrate patina. This creates the luster of silver while still being decidedly a bronze. The flame of creation is cast in sterling silver.

The Gold Awards are bronze with a ferric nitrate golden patina. The flame of creation is sterling silver gilded in 24K gold.

Around the base of the sculpture, inscribed text alludes to ancient cuneiform writing pressed into clay tablets and features the artists' invocation to the Muse: 'Sing within me Muse, Dwell in my imagination, Inspire me to bring forth my creations.'
A short, 30-second video on the making of the Muse 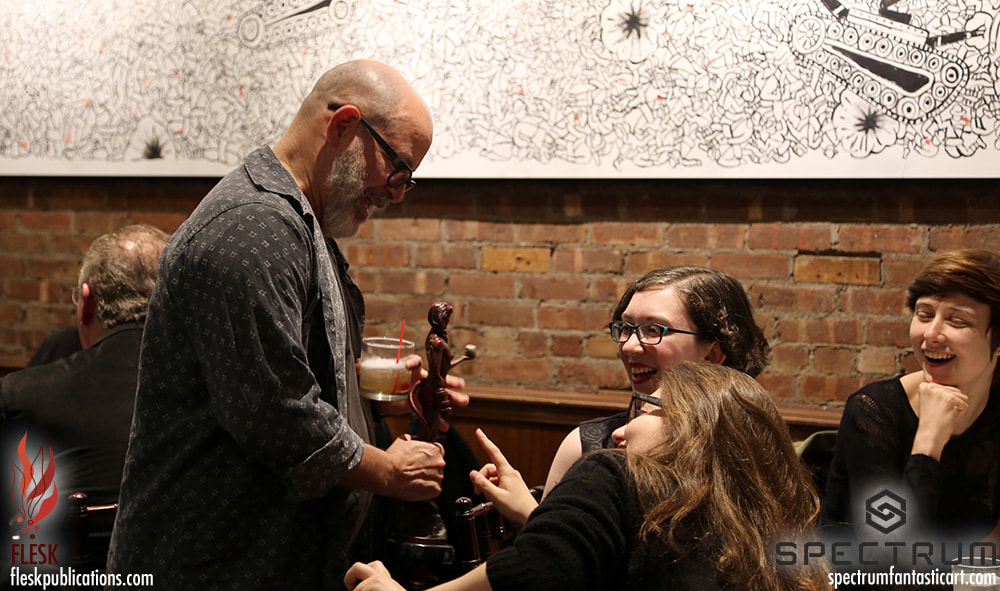 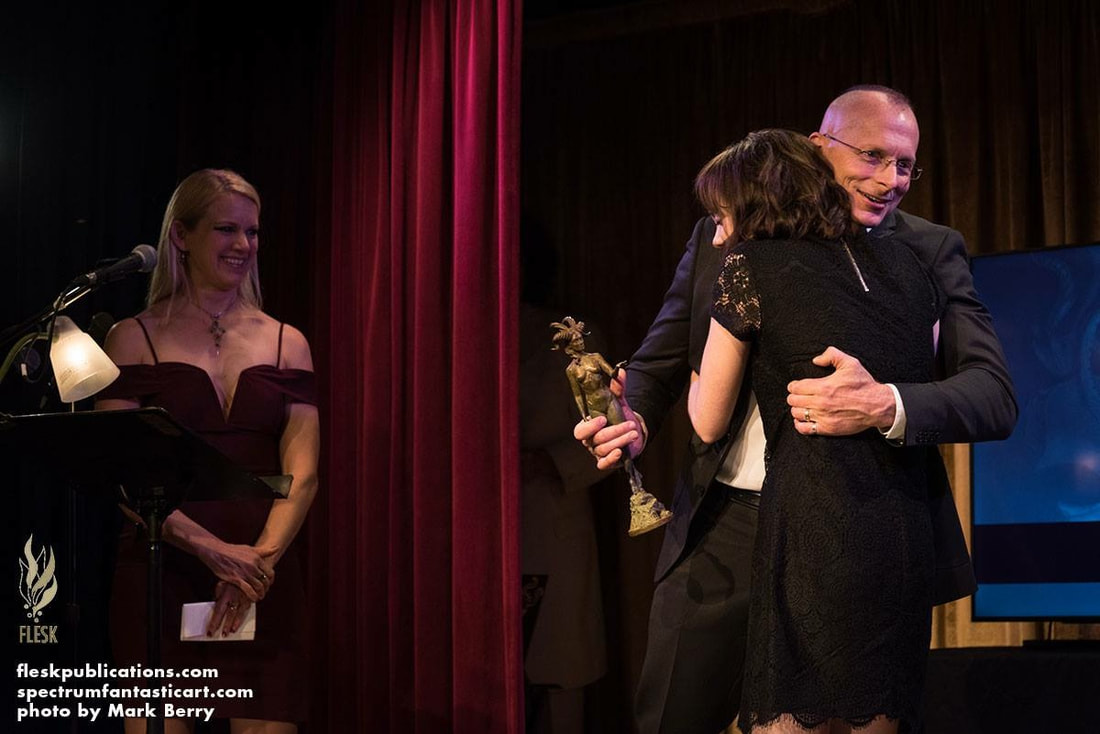 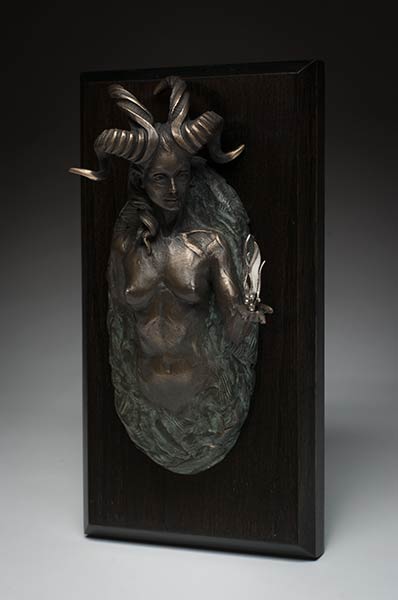 Much like the artist's muse, The Spectrum Rising Star Award evolved over time. This was her first incarnation.
The first time we attended Spectrum Fantastic Arts Live in 2014, we had the pleasure of spending hours perusing the artists' creations. Not surprisingly, we found the work of the marquis artists inspiring and beautiful. What we also found notably impressive and particularly striking was the work in the 'Artists Alley.' These young artists are producing works of truly remarkable merit. The energy, spirit, creativity, talent and determination we experienced in our interactions with these emerging artists was so inspiring that we wished for their accomplishments and contributions to be recognized as are those of the more established artists.

A conversation with Spectrum's director at the time, John Fleskes, brought this wish into reality, leading to the creation of the Spectrum Rising Star Award. This award recognizes and acknowledges an emerging artist who demonstrates exceptional abilities and dedication in the fantastic art genre. It also intends to encourage all newcomers to stay focused on their work and persevere through the challenges they will face in building a career in the creative arts.

We have long enjoyed acknowledging our appreciation of people’s artwork not just verbally, but also by supporting them to make more of it – the idea for the Rising Star Award is an extension of this.

"Spectrum began with the goal of providing recognition to the many artists often working in anonymity whose art was overlooked because of subject matter; the intent was to help give a voice to those who weren’t being heard," offers Arnie and Cathy Fenner, Spectrum's founders. "The awards for the competition are extensions of the desire to both spotlight achievement and to elevate the public's awareness of our field, of what we do, of who we are and what we love.  Spectrum respects the past, celebrates the present, and embraces the future; the Rising Star Award, thanks to the vision and generosity of Kristine and Colin Poole and the enthusiastic leadership of John Fleskes, is a wonderful expression of 'embracing the future' and will help Spectrum continue its 22-year mission of discovery, recognition, and encouragement."

With the advent of Spectrum 27, we've created and introduced a new and more inclusive version of the Rising Star Award - The New Muse. This award celebrates "Poeisis," the bringing into being of something that did not exist before. The first recipient of The New Muse in 2020 was Alex Dos Diaz.

This award will continue to focus the spotlight on younger, emerging artists, but also opens the door for artists who entered the field a bit later in life and are creating amazing work to be recognized as well. Each year, the recipient will receive this bronze sculpture as a gift from us. Each sculpture will feature an original patina, reflecting the unique gift that each artist brings to the community.

"Poeisis" represents the seed of inspiration from the Muse being born through the artist’s hands. The rocky precipice is the mountain we must climb in terms of developing our skills and overcoming obstacles and challenges in order to be able to create the imagery the Muse presents to us. 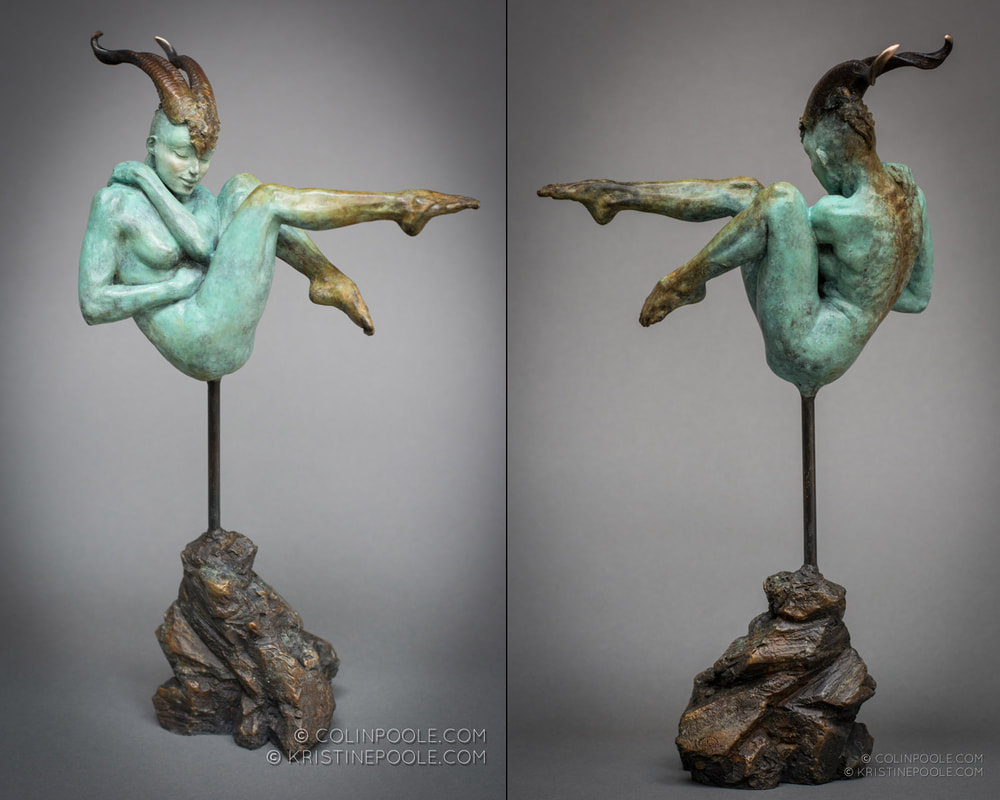 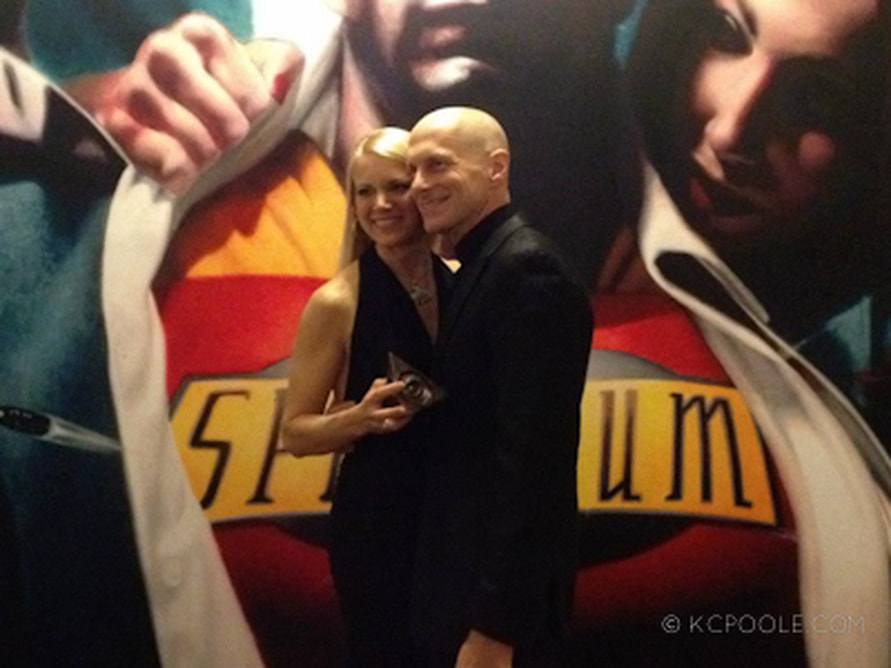