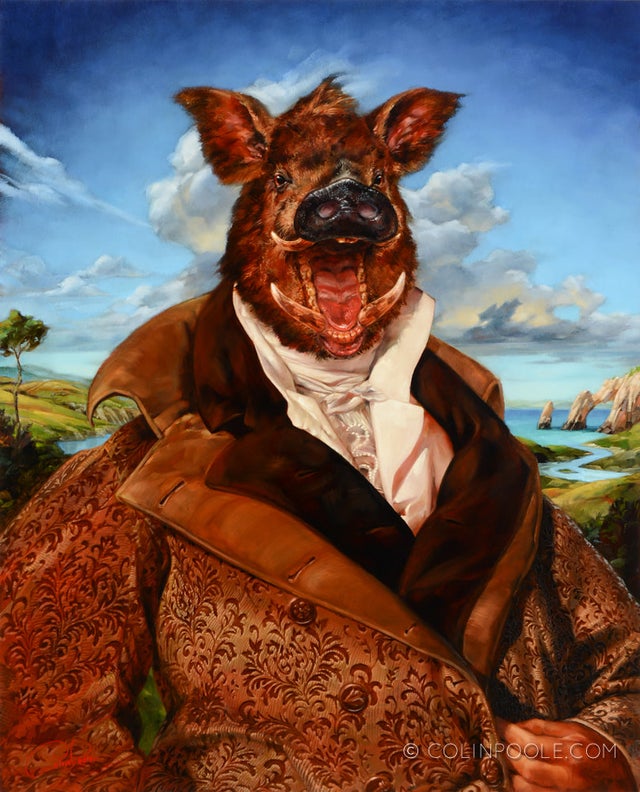 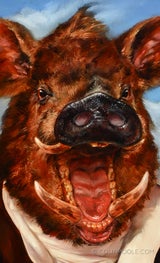 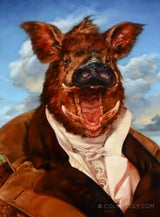 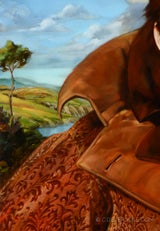 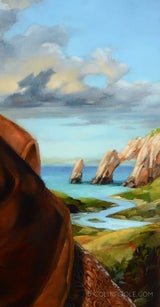 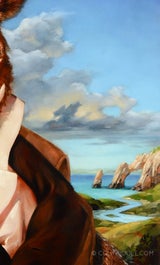 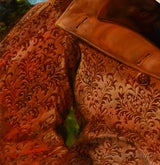 20"x 16", Oil on board with custom olive wood brown frame, free shipping in the continental United States. Vishnu's Third Avatar was a finalist in the Advertising Category of Spectrum: The Best in Contemporary Fine Art. This is an original painting. There is only one available.

When I was five, an old Greek icon painter invited me to create in his studio and became a friend for life. He was the consummate storyteller with a never-ending supply of ancient myths and folktales to captivate anyone within earshot. He gave me his love for the Greek Isles, tradition and mythology. He was one of the most wonderful people I have ever known and it is to him I dedicate this series.

In the Hindu religion, Vishnu's third avatar, or manifested form, was the boar. He is depicted either as the animal or as a boar-headed man. In this form he holds the wheel, conch shell, mace, and lotus flower that can be seen on the buttons of his coat.

Hiranyaksha, (golden-eyed demon) received a boon from the god Brahma after having practiced severe austerities in his devotion to him.  He asked to become king of the whole world, and that no animal which he mentioned by name should ever have the power to harm him. While enumerating all the animals he neglected to mention the boar.

Hiranyaksha proceeded to wreak havoc by plundering everything of value from the creatures of the world including the Hindu scriptures. Golden-eye then took Earth down into the ocean as a hostage, and Earth complained bitterly and loudly.

Vishnu assumed the boar form and plunged into the depths of the primeval ocean to rescue Earth. It took him one thousand years to kill Hiranyaksha and to lift the earth up with his tusks. You will find the forms of the continents marked on his lower tusks. He calmed Earth and made it ready for mankind by molding the mountains seen in the background.

This painting is based on Jean August Dominique Ingres’ image of Joseph Antoine Moltedo that he painted between 1810 – 1815.