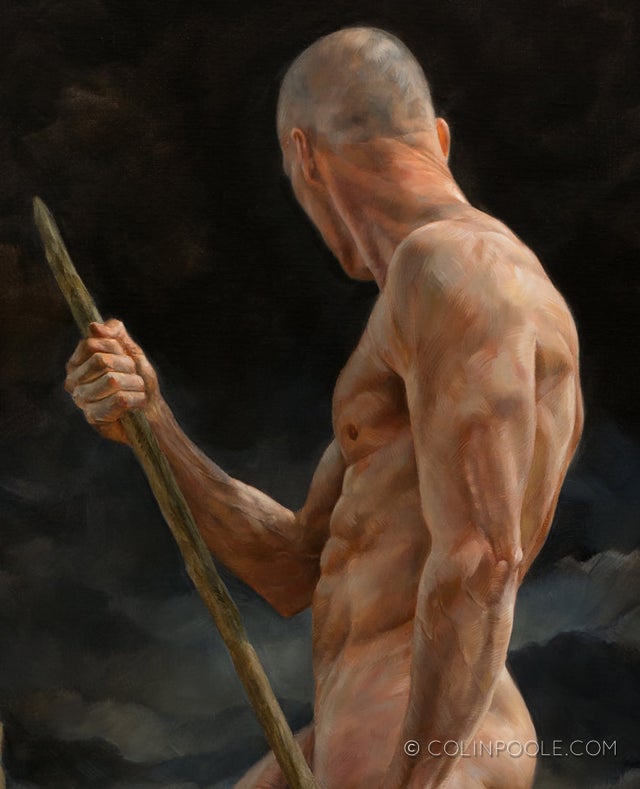 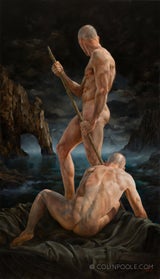 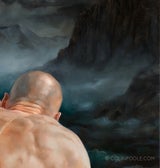 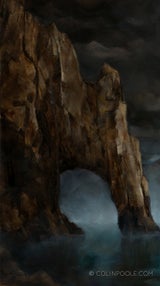 Oil on linen, 60" x 26", free shipping in the continental United States, 1.5" deep stretcher bars with canvas gallery wrap (painting continues around edges). Can be displayed as is or is suitable for framing. This is an original painting. There is only one available.

This painting depicts the mythological journey in the afterlife to the paradise of the Elysian Fields, a land reserved for mortals chosen by the gods. Charon, the ferryman, transports his passenger(s) across the Acheron River. The Acheron, in northwestern Greece, is considered in the Homeric poems to be one of the five rivers of the underworld. Later, the Roman poet Virgil referred to it as the Styx, a name that has remained in the modern vernacular.

The painting works with the inherent uncertainty of what happens after death. Charon and his charge look into the distance. Are they looking forward into the future or back towards the past? If one sees the boatman as standing in the stern, they are both looking back toward the fading, greying world of the passenger’s life and the glow illuminating them from the right would be from Elysium. Conversely, if they are seen as being in the prow of the boat, the glow would be from the world they are leaving and they both look towards the uncertainty of what lies ahead in the afterlife, which is obscured from view.

the ambiguity created by the similarity of the two figures poses the question of whether the passenger is actually both boatman and charge, guiding himself through his own journey. Similarly open to consideration, both figures are in one end of the boat, yet the craft is not tilting into the water. This presents the question of whether there are other passengers in the boat, possibly the viewer.

In this painting, the journey is the denouement of the passenger’s life - the final part in which all the strands of the narrative are drawn together and matters are resolved. From the title, one is left to presume that these and other questions are answered by the journey’s end.

This is one panel of a diptych. The facing panel, entitled “The Hand of Prometheus” continues the theme with the figures we see in “Denouement - Passage to Elysium.” Both paintings are the same size and were painted simultaneously. These, like others in this ongoing series, use mythology as a metaphor for one’s internal journey: the challenges, struggles, triumphs and joys of becoming who we are.