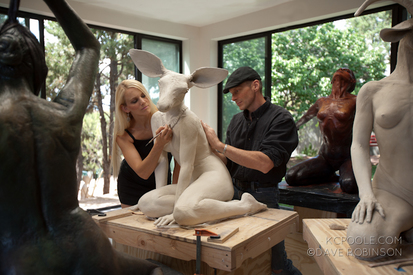 Colin Poole was born in Washington, D.C.  He received his Bachelor of Arts degree from Connecticut College with a concentration in metal sculpture.  He continued his professional education apprenticing with master sculptor Una Hanbury, metal sculptor David Smalley and master printmaker Lou Stovall.  Seeking out new means of expression in the medium of painting, he explored various media before discovering his love of oil painting.  Self-taught as a painter, his works have been shown and collected around the world.

Colin and Kristine both moved to Santa Fe at the same time 20 years ago, but their paths did not cross until 2008 when he asked her to dance a Tango. They were married in Greece the following summer and began combining their artistic talents the same year.

Colin’s enduring fascination with mythology began in early childhood, having been introduced to the Greek mythological pantheon while working in the studio of his mentor, Christosomos Chakos – a living master of Greek Icon Painting at the time.  These initial influences became a continuous thread that has wound its way through Colin’s paintings and sculptural works throughout his career.

Colin shared his love of myth with Kristine and together, they broadened their influences to include mythological stories from cultures around the globe. Their reimagining of world myths emphasizes the unity of our cultural roots – how people have, since ancient history, told stories of human and animal attributes combining with magical results.  Upon first encountering their collaborative creations, one might almost believe they’ve stepped into a reality where such beings could really exist.  Their shared passion for story and myth has broadened to include visual explorations of the source of inspiration and the many faces of the artist’s muse.

Regarding their working methodology in their sculptural collaborations, Colin says, “We are both completely involved in all aspects of the process from the beginning. There isn’t any part that we don’t both have our hands in, both literally and figuratively.”  Kristine adds, “We both bring specialized backgrounds to the table – my extensive background in ceramic sculpture and anatomical study is the perfect complement to Colin’s 25 years of experience as a professional painter and sculptor. His work has been exhibited in museums and galleries throughout the United States and Europe and his corporate client list reads as a “who’s who” of Fortune 500 companies.”

Their sculpture has been exhibited nationally and has been juried into assorted international publications including various years of “Spectrum: The Best in Contemporary Fantastic Art,”  “Infected by Art” and “The International ARC Salon Catalogue,” as well as “CAST,” and “500 Figures in Clay,” and has been featured in numerous blogs, magazines and other publications.  Their work has been recognized with various awards including the Silver Award in the Dimensional Category in “Spectrum 21” among others and is included in national and international fine art collections.